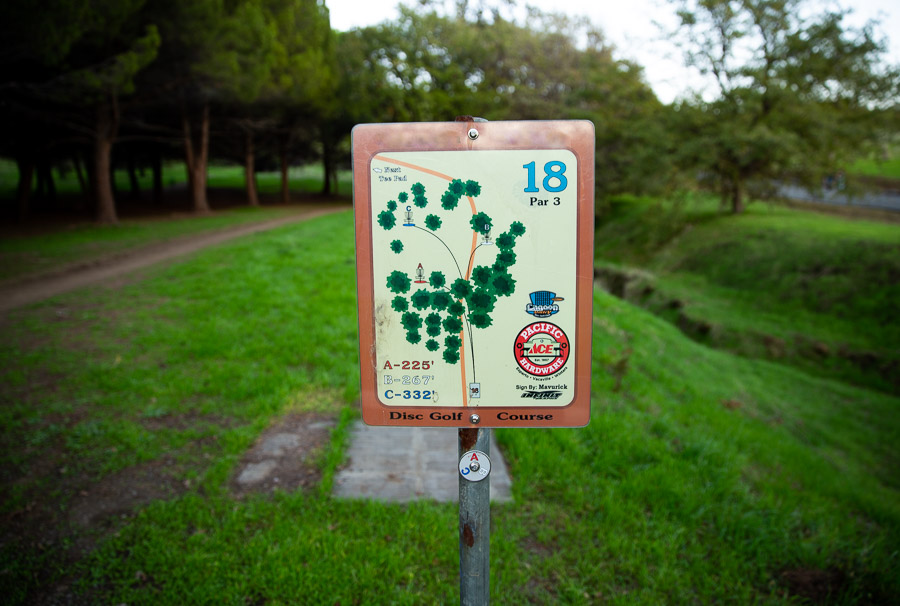 New to disc golf and looking for a comprehensive guide to all of the disc golf rules? We’ve got a clear breakdown of everything you need to know about playing this game properly.

If you are an experienced player playing a tournament, check out our disc golf tournament rules guide.

You could get the official rules from PDGA, but we’ve made it way more digestible.

Understanding these rules will vastly improve your knowledge of disc golf as a whole, so be sure to grab the PDF at the bottom for reminders!

Similarly to ball golf, the object of disc golf is to finish the course in the fewest throws possible. There are typically 9 or 18 holes, and each hole has a designated par. Each hole starts at the tee and ends at the basket, and after each throw, you'll throw again from where your disc landed. Once your disc hits those chains (probably the best sound in the world), consider that hole completed!

Here's a video on general disc golf etiquette and ‘unwritten rules' from Disc Golf Down Under, if you're curious.

Courtesy is huge in disc golf. Players must not display unsportsmanlike behavior, such as cursing, shouting, striking/kicking the course or equipment, distracting others, littering, or interfering with other players in any way.

Players must help to find lost discs, keep score correctly, and help to move equipment if and when asked. If courtesy rules are found to be violated, you'll get a warning first, but any more violations after that will incur a penalty throw.

Players will tee off within the designated teeing area, which is usually a pad or an area with clear boundaries made of turf, bricks, or artificial material.

If there isn't one, the area 3 meters from behind the teeing line is where you'll start, like in an imaginary rectangle. You must release your disc from within the teeing area, and you're only allowed to be outside the teeing area after your disc has been thrown. If you violate this rule, it's a stance violation (one penalty throw.)

Any throw that occurs within 10 meters of the basket is considered a putt. Once you've thrown your putt, you must maintain full-body balance behind the marker disc before heading towards the basket; if you falter, you will be hit with a stance violation and one penalty throw.

A mandatory, or ‘mando', is an artificial point or route that has been created (by course design) which tells players to throw to either the left or the right, which is usually on a sign on a tree or pole.

These are typically utilized to keep players, property, and other people safe, and to discourage players from taking a route that might cause back ups… or just even to make things harder! Paige Pierce famously missed a mando during the disc golf Pro Worlds in 2021.

Mandos demarcate restricted space, and if any part of your disc enters it (and even if it eventually exits the restricted space), players will get a penalty. If you fail to follow the mando multiple times, each miss will incur a one-throw penalty.

The basket target was created to allow players to fully complete the hole. The tray, chains, and chain support mechanism were designed to catch the disc and let it come to a complete stop while being supported by the tray or chains.

To consider a hole complete, your disc needs to enter the target above the tray and must come to rest in the basket. Discs that land on top of the basket are unfortunately considered a missed putt.

Each throw you make is considered an attempt towards the basket, which means it counts. Occasionally throws can be disregarded (by official ruling), which also means any penalty throw that's associated with it is also discarded. You can get penalized for things like missing a mando, losing your disc, or being out of bounds.

The bigger picture: players will throw in the order in which they are listed on the scorecard. As the game progresses, players with the lowest score will throw first. After everybody has a lie somewhere other than the tee, the player whose lie is farthest away from the basket goes next. If you throw out of order, it's considered a courtesy violation!

You only have 30 seconds to throw after the previous player after determining your lie. Anybody who takes longer than that will be penalized with a warning for “Excessive Time” for the first violation, and after a warning, you'll get hit with a penalty throw.

But- you're human. You can absolutely take a bathroom break just as long as you come back in a reasonable time. If you don't, you'll be marked with the +4 for missing the hole!

Once you've marked your lie with a mini marker disc, you must stay in bounds and have at least one part of your body in contact with the lie without crossing the rear edge of the marker disc. You also can't move an obstacle to make more room to throw. A violation of this is considered a stance violation.

If you see the term “supporting points”, this refers to any part of the body that is in contact with the playing surface at the time of the disc's release. More often than not, that means one or both of the player's feet would be the supporting points. However, there are times when other parts of the body are used. Here are some helpful diagrams from UDisc to better visualize the stance rules.

Foot faults focus specifically on the placement of the feet when it comes to stance violations. Foot faults generally get called when you're playing in a group because anybody in the group can call it- but for it to be official, somebody else has to witness it and confirm the fault. The penalty is one throw added to the score.

For example, if you're about to release the disc, and you've planted your right foot on the tee pad, but your left foot is touching the ground behind (or off) of it, that's a foot fault. If your left foot is off the ground, it's not considered a supporting point, and therefore would be legal.

If you've had the misfortune of losing your disc, you will have three minutes to search; that starts once you've arrived at the area you think it went. Any player can start the timer, and has to notify everybody that it has begun. All players must assist in the search, and failure to do so is considered a courtesy violation.

If your disc is a total goner, you'll receive one penalty throw. The next throw will then be made from the previous lie. If you are playing a competitive round and aren't sure what the rules are, make sure to take a provisional shot just to be safe.

If you are really new to the sport, make sure to check out our guide about how many discs you need to play disc golf.

Who invented the rules for disc golf?

Steady Ed Headrick, the founder of the PDGA, invented the rules for disc golf. In 1982, the first known rules of the game were rediscovered in his files and notes.

What are the disc golf rules for when I'm stuck in a tree?

The disc golf rules for when your disc is stuck in a tree are: it is only a penalty if an official calls it one, or if the tree itself is out of bounds. If the tree is in bounds, it is not a penalty. This also depends whether or not a two meter rule is in effect.

Which disc do you start with in the golf rules?

The disc that you start with in golf is usually a driver.

What is the two-meter rule in disc golf?

The two meter rule in disc golf states that if a disc comes to rest at least two meters above the in bounds playing area, the thrower will be given one penalty throw. The two meter rules is only in effect when the TD (tournament director) declares it, and it can be in effect for specific holes or the entire course.

What is the golden rule in disc golf?

The golden rule in disc golf is to have respect for other players, their equipment, and the game. This encompasses positive sportsmanlike conduct, having etiquette during the game, respecting the disc golf course, and most importantly… having fun!