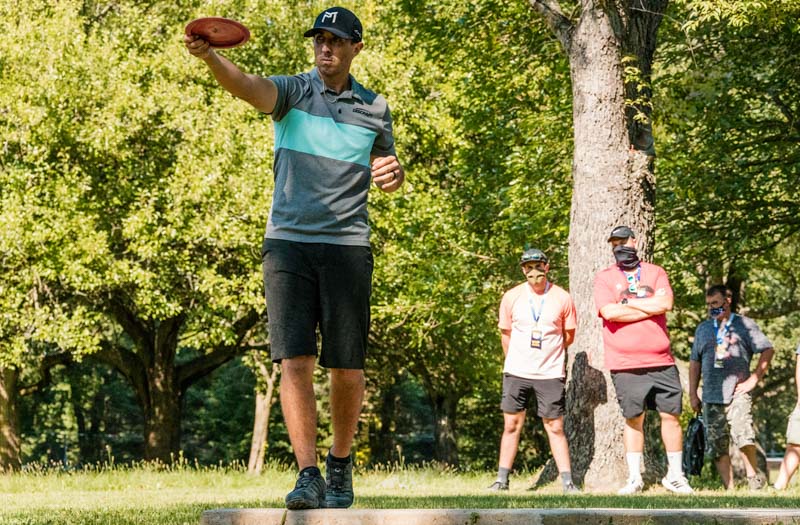 Let's cut to the chase – there's always an ongoing discussion of who the Top 10 greats are in every sport. The GOAT, if you will. And naturally, the talks from fans and players typically weigh things like history, streaks, winnings, and overall performance stats, to name a few.

When it comes to disc golf, two incredible players are typically immediately named as the greatest (and plenty of blogs and forums debate between them).

These players have obviously made our list of the Top 10 best disc golfers of all time, along with a few others, so let's dive into our list without further ado!

The Champ. Simply put, Climo's pure domination of the sport (as evidenced by his nickname) has earned him this rightful title. With 12 World Championships under his belt, Ken Climo was the man from the 90s to the 2000s. But, dear reader, does the number of championship wins make a GOAT?

One could argue that today's game is much more skilled, cutthroat, and consistent than it was during Climo's era.

I could venture to guess that we probably won't see anybody winning 12 titles in their career like The Champ was able to. Players then weren't dedicated full-time, and there were not as many players as there are now.

Today, we're seeing disc golf pros designing discs to their liking and practicing from sun up to sun down to get the edge over their competition. It's just tough to weigh different eras of disc golf players and their career curves because context matters!

Discs and courses have improved over the decades, and that fact just cannot be discounted.

Regardless of those facts, Ken Climo's legacy dominated his era like nobody else in history had.

He was the top-ranked player in the world for well over a decade, a feat that not many athletes can similarly boast about! And his humble background (if you didn't know: he was working in construction full-time) makes his achievements much more impressive.

Paul McBeth has 6 World Championships under his belt, earning him mega notoriety as he is the only one to come close to Ken Climo's reign. (Fun fact: four of these were in a row, from 2012-2015.)

With a whopping total of 140 career wins, he's currently listed as the #2 player in the United States Tour rankings from PDGA.

As the game of disc golf continues to evolve, Paul McBeth has positioned himself squarely as one of the best disc golf professionals in this era. Along with the many World Champion titles, he has also received the title of PDGA Male Player of the Year three times.

He's an extremely consistent, competitive, and famous player with a hugely loyal fanbase, rightfully earned by his strong performances.

With such a successful history, Paul McBeth can (and should) be considered one of the legendary greats (considering that we probably won't see anybody win 12 world championships ever again…). He'll likely go down in history as the greatest of his era!

A great rival of Paul McBeth, Ricky Wysocki needs virtually no introduction. He's currently ranked as the #1 player in the US by PDGA, and the future looks bright for this 6'4” behemoth.

Ricky went pro in 2010 and has been dominating the scene since. It hasn't always been sunshine and rainbows for this disc golf great, however. He battled Lyme Disease from 2019 – 2020. After a long struggle with self-confidence and depression, he charted a major health comeback in 2021.

Watching Ricky develop over the years has been thrilling. And it's obvious that he has managed to stay ahead of a constantly changing game.

His endorsements, salary, and bonuses used to be relegated for a small handful of touring players, and now, that number has skyrocketed. Ricky has already surpassed Ken Climo in career money with roughly 100 events under his belt.

Ricky's dedication to the game is admirable, and we know that he still has a lot of game left. As far as being the best in the world, Ricky is definitely one to watch.

When talking about history and all-time greats, sure, we can look at statistics. Then we can also look at high achievements, lasting impact on the game, and various other factors. Our list wouldn't be complete without including Barry Schultz, who has played since the early 1980s.

The list of accolades he has accumulated is impressive: from 2003-2009, he held the single-season earning a record of roughly $40K (passed in 2010 by Nikko Locastro). He's one of only six men to win more than one World Championship title, and he is also only one of four who have won the USDGC event more than once.

Read Next: 9 Facts About Jeremy Koling

But that's not all. Barry Schultz also holds two Masters World Championships, which puts him alongside Ken Climo as the only two men to earn both a Masters and an Open title.

This PDGA Hall of Famer saw the level of competition rise throughout the 2000s and stayed ahead of the game. And for that (and a thousand other reasons), he's worthy.

If you know anything about the FPO, you're no stranger to the Juliana Korver name. She's a longtime legend and one of the best female disc golf pros of all time! She is a 5x World Champion who won her first one in 1998 when they started keeping a rating system. And her next 3 World Champion wins were back-to-back (1999 to 2001). She's nothing but consistent!

Fun fact: she has two separate tournament-winning streaks over 30 games won in a row! Beast mode.

Juliana is still beating women half her age in competition to this day. And if that isn't the stuff of legends, I don't know what is.

When speaking about female disc golf greats, Paige Pierce is a huge name in the sport and is next on our list. Has she been around for ages, like a few others on this list? No. However, her trajectory is remarkable, and one can easily see how her successes will carry her far into the future.

Paige Pierce ties Elaine King and Juliana Korver for 5x PDGA World Championship wins. She also has 15 Major Championship wins, and in 2018, she broke the record for the highest female player rating (978).

Glass ceilings aside, Paige is currently ranked as the #2 FPO player in the US; she is clearly a consistent force to be reckoned with.

The name “Paige Pierce” is synonymous with “firsts.” With 30 wins, she's the all-time leading women's winner on the Disc Golf Pro Tour. She's also the first female player ever to win the USDGC Performance Flight Division.

She's incredible alone and just as good when teamed up. She (along with the uber-lovable Jeremy Koling) holds two Mixed Doubles World Championships. The list goes on and on with Paige, and we know the future looks bright.

Elaine was inducted into the 1997 Disc Golf Hall of Fame. She can definitely be considered a GOAT that has shaped the game, especially for female players.

When discussing the greatest players of all time, we cannot discount female game-changers like Elaine.

She currently sits on the PDGA Board of Directors and holds the chair position for the PDGA Women's Committee. Given her long and extensive history with the game of disc golf, we feel that Elaine and her many contributions earn a spot on our list of top disc golfers of all time.

David Feldberg started playing disc golf in 1997 and began touring just a few years later. He achieved some pretty major success in the early 2000s; most notably, he became the first person who wasn't either Ken Climo or Barry Schultz to win the United States Disc Golf Championship in 2005.

He's had more than a few notable wins (123 to date, 18 of those being MPO National Tour Wins) and is still performing well today, ranking highly as one of disc golf's top earners of all time.

Des initially started playing disc golf recreationally as a way to relieve some of her college stressors. She joined the PDGA in 1999 and, shortly after that, would win her first World Championship! Des ultimately went on to win four World Championships, inspiring countless female players to join in on the fun.

This Hall of Famer was inducted in 2017 and still advocates for girls and women in sports. She is a co-founder of EDGE (Educational Disc Golf Experience), which aims to teach youths and educators about the great game of disc golf as well as save more green space.

Des is currently signed with Mint Discs as of 2022, and we know we'll see great things come out of this partnership.

Valarie Jenkins is the last on our list, but that doesn't mean her achievements aren't impressive in their own right.

Her background includes a strong disc golf heritage (her mother is a 3x Women's Champion, and her brother Avery Jenkins is a former Men's World Champion), an early competitive start, and some huge career wins.

At the end of 2016, she was considered the world's third-highest-ranked female disc golf professional. She was inducted into the Disc Golf Hall

of Fame in 2020, even though she had officially left the Pro Tour in 2018 to start a craft brewery called Bevel with her husband, Nate Doss (sound familiar?)