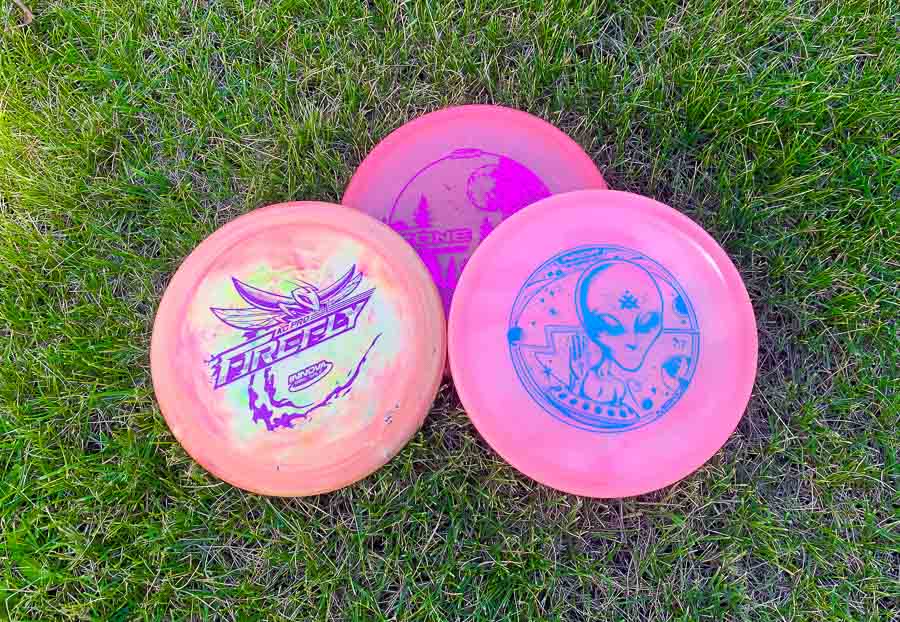 Here's how we picked this list of the best discs for backhand throws (skip ahead to jump straight to the reviews.)

Learning the ins and outs of disc golf means taking in a mammoth amount of information- throwing technique, disc reviews, etc. Let's take it back to simpler times and discuss the humble backhand. Do you consider yourself a backhand thrower? Chances are, you're in the majority.

Many of us learn the backhand first (unless you're one of those freakish, naturally gifted forehand-dominant players), and there is no shortage of discs to choose from. But are some discs just better suited to backhands, especially when it comes to learning the game? We think so.

Join us as we dive into the 14 best discs for backhand dominant disc golfers- we'll cover discs that we believe are suited to a wide variety of skills and abilities; hopefully, you'll come away with some fresh insights (and maybe a new disc!)

If you are a beginner learning the ropes, you can learn the basic disc golf rules after reading this backhand disc review!

An Overview Of Backhand Throws

When it comes to maximum distance, some disc golfers swear by their backhand, whereas some strictly insist on using their forehand. Even though it's an ongoing discussion on various forums (that often ends up spinning into threads of technique commentary and pretty helpful YouTube video links), we think that backhand throws are the way to go.

While a few players can throw forehand shots farther than their backhand, overall, more players can throw backhand farther. We'll quickly cover the mechanics of backhand throws; if you're curious, you might pick up a tip or two to extend your potential distance!

You're also utilizing different (and larger) muscle groups to generate power when you're throwing backhand. You'll draw from your arm muscles and your legs, hips, core, and shoulders to drive that disc explosively. Forehand shots also use these muscle groups, but to a lesser extent.

Your wrist is also an important player here. Your wrist angle determines your throwing angle, and the main three are hyzer, flat, and anhyzer. You'll complete your follow-through upon the disc's release, carrying all your motion to the side.

A powerful and accurate backhand can allow you to achieve a variety of shot types, and the more you practice, the better equipped you'll be out on the course! Some intentional backhand shots executed with an understable disc, for example, include rollers, hyzer flips, and turnover shots.

What Makes A Good Backhand Disc?

The beauty of backhand is: any of the four types of discs (distance drivers, control or fairway drivers, mid-range, and putt and approach) can be used! Determining what makes a good backhand disc will require a closer look at the flight ratings.

Speed, glide, turn, and fade: these four numbers will tell you how the disc will behave. Luckily for you, backhand shots can be used on any speed rating, provided that you have the arm power for it. The higher the speed number, the more potentially frustrating the disc will be if you aren't able to power it up the way it requires to fly. For beginners, lower speeds are where it's at.

Just like speed, any amount of glide is excellent for backhands. We're partial to discs with higher glide ratings as they can be more forgiving, especially for beginner disc golfers. For maximum distance, you'll want a disc that soars- so noting the glide rating can be helpful when you're out buying discs.

Turn and fade will mainly dictate the direction of the disc's flight path. The turn rating will help you understand where the disc will head once released from your hand. For example, a disc with a rating of -5 would be considered a very understable disc.

Understable discs tend to be more favorable for slower arms, as the disc will fly straight for a tad longer.

The fade number dictates where the disc will go near the end of the flight path. On the typical RHBH throw, discs tend to fade to the left. Very overstable discs are designed to fade hard and are typically utilized by more intermediate to advanced players who select them for a specific need or shot type.

There's no hard and fast rule for what makes a disc a “backhand disc.” However, there is a plethora of discs out there that can suit your skill level and help improve your backhand throws. Discs also have a funny way of pointing out significant form errors, so be sure to practice throwing discs within your skill range.

We'll include our suggestions for the best disc golf discs for beginners working on their backhand at the end! But for now, let's get into distance drivers and mid-range discs that will suit backhand dominant players.

In no particular order, here are some of our favorite distance drivers for backhand throws.

This understable disc is a fantastic choice for everyone, from beginners to more advanced disc golfers. In Z-plastic, the Avenger SS is highly durable (giving you longevity) and also doesn't sacrifice excellent grip.

As a 10-speed, this distance driver can help throwers with big arms achieve some maximum distance when thrown backhand.

Halo Star is a sturdy plastic and fitting for a disc that's considered one of the most popular distance drivers ever made. The Destroyer is an overstable disc that is perfect for backhands and therefore better suited for more intermediate and advanced disc golfers.

With it being a 12-speed, the Destroyer can definitely handle a lot of torque, even in headwinds.

The Octane is a high-speed, stable distance driver that just excels in wide open spaces. For those looking to increase the distance of their backhand drives, this disc is a great candidate.

The body is relatively domey and will afford gratuitous glide, but that doesn't mean it's the most beginner friendly. Great for those who also prefer wide rims and are looking for something similar to a Destroyer.

There's one word to describe the Prodigy X3, and that's consistent. This glidey disc was designed with all levels in mind and is great for those long backhand drives.

It's easy to put the X3 on any line and watch it stay the course. In the unique 400 plastic, the X3 still has a firm, grippy feel regardless of weather conditions, and is highly durable for long-lasting play.

Getting bored of your putters but unable to throw drivers? If you're looking to amp up your midrange arsenal, check out a few of our favorite midranges below.

This insanely popular disc almost doesn't need an introduction! For players who may be unfamiliar, one of the biggest selling points of this disc is that it can suit a super wide variety of skill levels and situations—its versatility is unparalleled.

The Buzzz will hold any line it's put on, making it a great tool for players to analyze their technique.

The Roc3 is one of the most dependable overstable midranges available today (just ask world champion disc golfer Nate Sexton.) It's slightly faster than its original counterpart and performs well in windy conditions. The Roc3 will give you a dependable left fade every time, and for intermediate players looking to improve their backhand, this disc is a great tool for measuring arm power.

This beginner-friendly straight shooter is great for beginners looking to expand their midrange repertoire. Many use the Mako3 as a straight-flying approach disc as its flight path is so unnervingly direct and accurate. In Halo Star plastic, the Mako 3 is super durable and will beat in slowly over time.

Many pros swear by Mako3; it was even Kona Panis's signature tour series disc for years.

The M4 is so generous with the glide, it's a beauty to watch. This mid-range disc is very easy to control, even for beginners, and can be utilized for wooded courses, tunnel shots, and turnovers.

The M4 is known for its comfortable feel, and in durable 500 plastic, you can trust that this disc will hold up to trees it may end up meeting.

So, you're a player with slower arm speed and just starting out. Working on your backhand form is a great way to improve your game quickly, so props to you for coming here to learn!

There are so many discs out there that it can be confusing to figure out what will suit you best; after all, when it comes to disc golf discs, opinions are subjective to people's experiences and abilities!

One of the best things to keep in mind as a beginner player is to play to your skill level. When you're out shopping for discs, that means a disc with a higher speed rating doesn't mean it'll necessarily go farther- it means it'll require more power to get there. Also, there's no need to get a super heavy disc.

Lower-speed discs are made for slower arms and are way easier to throw; there's no shame in that! It's better to correct your form as you're starting out and upskill slowly than to learn bad habits by throwing discs incorrectly for a long period of time.

Look for discs that also have a bigger glide rating and a high turn number. More glide means more distance, and a high turn rating means the disc will be more understable. When thrown slowly (“underpowered”), understable discs will actually go a bit farther for longer.

We recommend checking out these great putters and midranges that fall under these parameters and are great for building confidence during practices and out on the disc golf course.

The Judge is a super beloved stable putt and approach disc. The EMAC is Eric McCabe's version of the Judge, and it offers high glide and a lot of forgiveness for beginner disc golfers.

This putter is trusty and feels good in the hand with its barely noticeable microbead. If you're looking to become a better disc golf player, getting a Judge would be the way to start.

This understable putter is awesome for novices who are learning to throw straighter. It's got a low profile, which many beginners find comfortable in the hand.

The Proxy will display a neutral flight regardless of the speed it's thrown, making it a great tool for intermediate players who are learning to dial in their approach game.

For short midrange shots, the Comet is great for beginners who might be looking for a disc that has an old-school feel.

The Comet will encourage players to really dial in their technique because it will bring awareness to flaws immediately. That kind of feedback is what makes the Comet so popular, and as a 4 speed, it's well-suited for slower arms.

If you're looking to add your first fairway driver to your bag, the popular Leopard is a great choice.

Beginners can enjoy more straight-flying distance due to the disc's understability. It's not super fast, as a speed 6, but is a prime choice for someone with lower-speed drives who would be getting into the next stages of disc golf development.

As far as starting drivers go, the Sidewinder is an understable disc that finds its way into many beginners' hands. Is it the potential for a beautiful flight and sweet distance off the tee?

Or perhaps its ability to turn into a roller disc and get you out of tight spots? It's probably both, and then some: the magic of the Sidewinder (when thrown with proper technique) is obvious.

If you've made it this far in the hungry pursuit of knowledge and disc know-how, we commend you. Your reward, weary traveler, is our recommendation of the Innova Wraith. This is the perfect driver for intermediate players looking to step up their game.

There is much to love about this disc (ask any Wraith fan on Reddit) which makes it a great choice for disc golfers with the arm speed looking to pull the trigger on their first go-to distance driver.