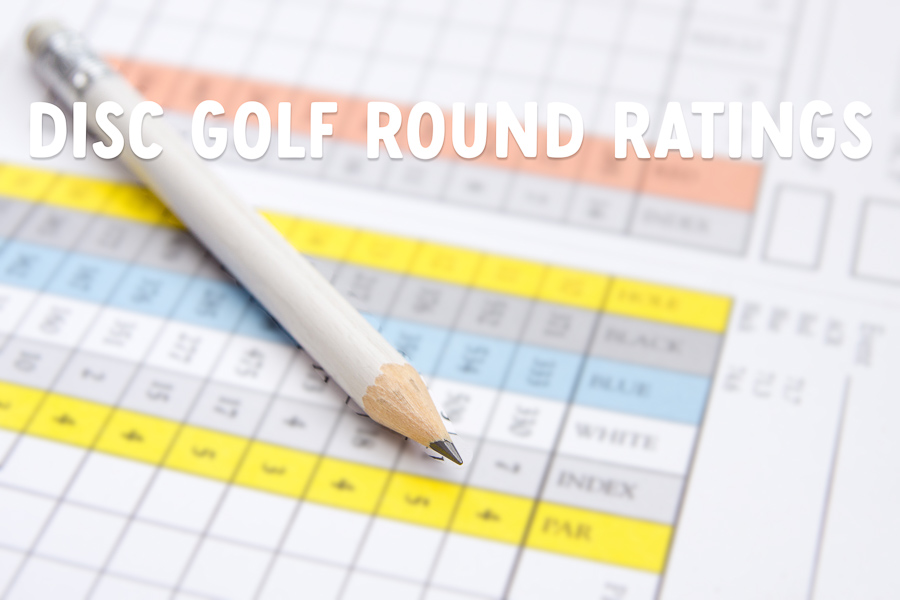 So you just shot your personal best at your local course. The drives were going where you wanted, the putts were on point, and the round just felt smooth. This is one of those days when the sport comes easy, and you think, “Hey, maybe I'm getting pretty good at this disc golf thing, maybe I'm ready for my first tournament.”

Naturally, you'll start to wonder where your game stacks up. The Professional Disc Golf Association, the governing body of the sport, has developed a system for doing just that. The PDGA rating system takes your overall game and boils it down to one number. In this article, I'll cover how ratings are calculated and offer some ways for you to estimate yours.

What Is A PDGA Rating?

One benefit of joining the PDGA is receiving a player rating. All current members with at least one sanctioned tournament round recorded will receive a numbered rating that describes your scoring ability relative to all other PDGA members.

Unfortunately, the PDGA keeps the nuts and bolts of their ratings calculations hidden behind a veil of secrecy. No published algorithm or equation explains exactly how ratings work. There is no way to independently calculate an individual round rating, much less your overall player rating.

Round Rating vs. Player Rating

Each round played in a sanctioned event is rated individually. Multiple rounds are then weighted and combined to generate an overall player rating. The vast majority of round or player ratings come in the 750-1000 range.

To find round ratings, go to the PDGA website for any tournament and click on the link that says “show round ratings.” The ratings will then appear next to the raw score for each round.

To find individual player ratings, go to the player's PDGA homepage. For example, put “Paul McBeth PDGA” into a search engine, and his page will pop up. You can search his Ratings History, showing every rated round he's played.

The 1000 rating plateau has a certain mystique associated with it. This is because a 1000 rating is what the PDGA considers a “scratch” score. A “scratch” player can best be described as a high-level golfer who can consistently shoot near the top of the field and compete for wins in the MPO (Mixed Pro Open) division.

The 1000 rating is the central data point from which all other ratings are calculated. For each tournament round, the PDGA's algorithm decides what a hypothetical 1000-rated player would shoot on that day. This score is defined as the “scratch scoring average.”

How Does Scratch Scoring Average Work?

The Scratch Scoring Average (SSA) is the baseline data point that determines every other rating. To describe how this works in practice, let's say the SSA for a round on a basic course is an even par 54. This makes a score of par a 1000-rated round.

Once the 1000-rated score is determined, each stroke is assigned a point value, usually between 6-12. For the sake of simplicity, let's say the stroke value for this round is 10 points. Simple math reveals that a -1 raw score of 53 will equal a 1010-rated round. Conversely, a +1 will equal a 990-rated round. And so on down the line.

On longer and more challenging courses, there will naturally be higher scores. The more strokes per round, the fewer points each individual stroke will be worth. Each stroke could be worth as little as 6 or 7 rating points on long courses.

What Factors Influence The SSA?

There is no definitive SSA assigned to each course. It is a moving target that is determined on a round-by-round basis. The 1000-rated round varies depending on the difficulty of the course, the weather conditions during the round, and the ratings of the individuals playing that round.

For example, let's say it's the first round of a two-day tournament on an average par 54 course. Weather conditions are perfect, so there are a lot of low scores. The SSA might end up being a 47.

A torrential rainstorm hits the following day, bringing 30 mph winds. The same set of players on the same course struggle to stay under par. In this round, the SSA could be a 52.

For this reason, it is impossible to determine the SSA of your local course outside of a PDGA-sanctioned event. Changes to the course layout, such as moving pin positions or adding out-of-bounds lines, will also influence the SSA. The strength of the players in the field, which in the ratings calculation are called “propagators,” will also have a dramatic effect.

What Are Rating Propagators?

Once a player has eight rated rounds on record, they become a ratings propagator. This means their scores will factor into calculating the SSA each round. The player ratings of the propagators have a strong influence on the round ratings.

Generally speaking, in a field full of 1000+ rated players, lower-rated players have great opportunities to improve their ratings by simply keeping up with or barely losing to the big guns. Conversely, if you are the only 1000-rated player in an event, you will need to dominate the competition to maintain or improve your rating.

This again drives home the point that PDGA ratings function as a relative measure, not an absolute measure. A player who dominates events at their local courses could earn a 1000+ rating, but when they attend a pro tour event a few states over, they might get destroyed by touring pros and see their rating fall.

How To Estimate Disc Golf Round Ratings

To estimate how a round at your local course will be rated, look up the PDGA page of the most recent tournament played there. With some simple math, you should be able to guesstimate your round ratings, though it's important to remember that tournaments often add extra holes, redraw out-of-bounds lines, or have inclement weather.

Another helpful resource is the website dgcoursereview.com. They have developed a metric called “Scratch Scoring Estimate” (SSE). This projects what a 1000-rated round will be at any given course. But even this has a lot of variances; as you can see here, Golden Gate Park in San Francisco has an SSE of 49.2, but in the ongoing Wednesday Night League being held there now, a 1000-rated round has been about 47-48.

Also, keep in mind that a leisure round with friends is a much different environment than performing on-demand under pressure in a tournament setting. The pace and tone of sanctioned competition will affect scores.

Using the resources listed above, you can probably estimate your ratings within 30 or so points, ranging from 3 to 5 strokes per round.

What Division Should I Play?

Sorting players into divisions is perhaps the most valuable part of the PDGA ratings. The PDGA's division guidelines are listed here, explaining recommended ratings and general skill sets for each division. Of course, age and gender protections for divisions are not rating-dependent (e.g., a 1000 rated 15 year old is still allowed to crush everyone in the Junior division).

These guidelines allow for fair play within divisions and prevent players from what is known as “sandbagging.” A “bagger” is a player who registers for a division well below their skill level. For example, a player with a 920 rating is solidly in the “Advanced Amateur” or “AM1” division. This player is not allowed to play in the “Recreational” division and ensure them an easy victory.

Read next: What Is A Provisional In Disc Golf?

If you're getting ready for your first event, it's OK to sign up for the Novice or Recreational divisions to earn an initial rating. But if you have any competitive experience and a solid understanding of the game's rules, Intermediate is the best place to start.

Ratings are only one way of measuring performance on the course, and hardly the most important. Having fun, exercising, and participating in the healthy competition should supersede the number on your PDGA profile.

That doesn't stop me from obsessing over it sometimes. I've been stuck in a dreaded “dead zone” of 960-980 for years. A bit too good for amateur divisions but needs to be better to compete at the top of the pro field. Getting to 1000 and finally becoming a “scratch” player is a motivator that keeps me grinding practice rounds and competing in tournaments.