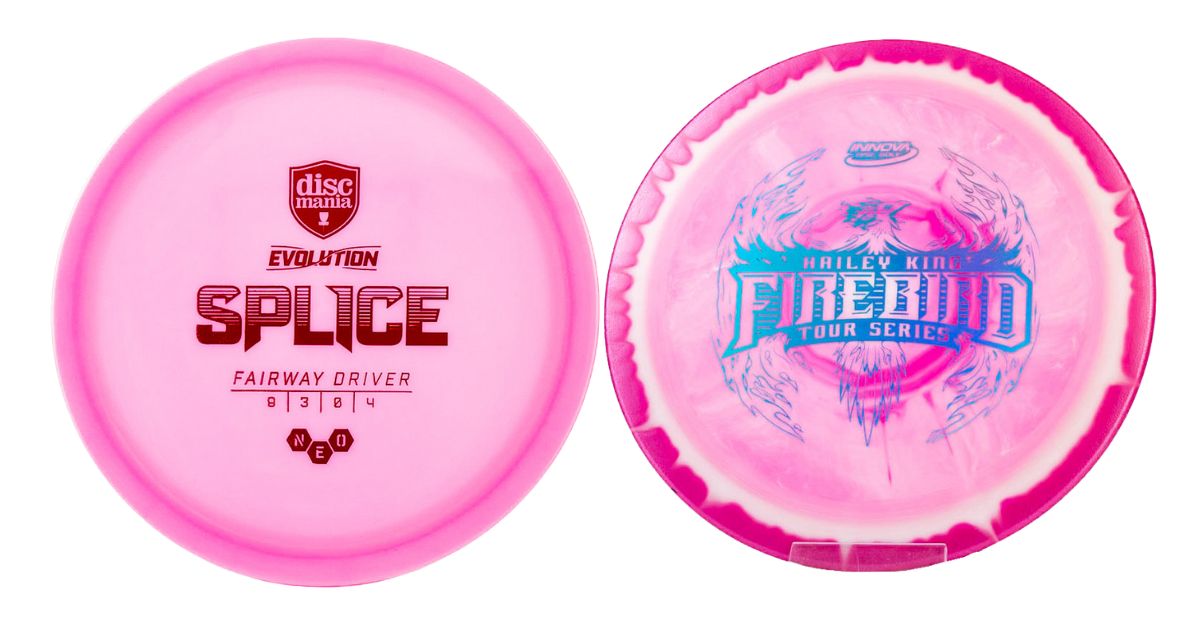 If you've ever played into a stiff, unyielding headwind, you know the value of an overstable distance driver. Even in calmer conditions, these discs can be useful for punching through gaps and shaping shots with reliable fades. In this article, we'll dive deeper into two distance drivers, the Discmania Splice and the Innova Firebird. Which belongs in your bag?

Approved nearly 23 years ago in March 2000, the Firebird is a pioneer in the category of fast, overstable discs. Its flight characteristics (9/3/0/4) did not exist before that date. The Firebird was designed to complement, if not enhance, the overall game of Nate Sexton, a renowned forehand-dominant player who still makes frequent appearances on the national stage. But since its debut, nearly every other manufacturer in the game has developed a copycat mold.

Generally speaking, the Firebird can be trusted to fly true to its original design. It will handle power and hold its line without turning. It will battle through headwinds and fade predictably near the end of its flight.

The Splice can be viewed as a Firebird lookalike on the surface, but differences in flight are noticeable even to the untrained eye. Where the Firebird appears to glide for a time, the Splice crashes prematurely, fading straight into the ground. Its official flight numbers are the same: 9/3/0/4. In practice, however, 9/2/0/4 or even 9/2/0/5 may be more accurate.

This distinct lack of glide will be more noticeable high in the air or on extreme hyzer angles. But the Splice likes to fight out of anhyzers too. Many players find other, more utility-based purposes for it, like hammer throws, thumbers, and grenades.

Before parting ways in 2021, Innova and Discmania enjoyed a productive relationship. By that, I mean Innova produced Discmania's “Originals” line, typically in D-line (DX) or C-line (Champion) plastic.

Players familiar with C-line, or Champion, plastic know that it tends to give discs a little added overstability. Firebirds and Splices in this plastic type will glide less and/or fade more than expected. These players also know that D-line or DX plastic loses its intended overstability after only a few heavy tree kicks.

The Firebird is available in several other premium plastics: Luster Champion, Star, Gstar, Halo, and InnVision Star. It is also available in Pro and DX plastic, two of Innova's baselines. Halo Star Firebirds fly more like Champion and Luster Champion Firebirds than Star Firebirds. Star and Gstar plastic have less overstability but retain their flight characteristics much longer than either baseline.

Due to lifespan differences, buying a Firebird in premium plastic is recommended. If you value grip more than overstability, Star plastic is for you. Or maybe Gstar if you live in a colder climate. Many consider the Champion Firebird to be the beefiest, most reliable choice.

At the moment, Discmania offers the Splice in two different plastics: Evolution Neo and Meta. Evolution Neo plastic is produced by Latitude 64 and blends their Opto and Gold line compounds. It is a hybrid of sorts, embodying qualities of both Star and Champion (C-line), with a little more grippiness than regular Champion.

In Evolution Neo plastic, the Splice flies with extreme overstability. It appears to glide less than a Firebird and pulls itself out of anhyzer angles quickly out of the hand. In Meta plastic, this characteristic is pronounced even more dramatically.

Both discs may share similar dimensions, but Splices have noticeably flatter domes. This may lend Splices a certain shallowness in the hand that some players favor. Its flatness may also be responsible for its distinct lack of glide.

Unlike some of Innova's other molds, the Firebird is consistently produced from run to run. They have a slight dome but are not “pop-topped” like certain Destroyers. They fly true to numbers, never turning mid-flight.

The same can be said of the Splice, except it is consistently board-flat and much more overstable.

In theory, the Splice and Firebird are lookalike 9-speed drivers with the same flight numbers. They are designed to fight headwinds and handle power with ease. They can both be trusted to fade near the end of their flight. But for every similarity, there exists a difference, too:

Driven straight and low, the Firebird will carry forward most of its flight before fading to the ground. It will not appear to want to crash prematurely unless thrown high on a steep hyzer angle. In that sense, although a max weight Champion Firebird will fly with more overstability than a lighter Star Firebird, I would not go so far as to classify it as a “meat hook.”

Read Next: Discraft Hades vs Scorch

The Firebird remains stable in all conditions, but it does not appear to fight out of anhyzer angles immediately out of the hand. The Splice, however, fades off its line sooner rather than later. Its extreme mid-flight overstability makes it useful for anhyzer flex shots and hammer throws, thumbers and grenades, areas in which the Firebird may not necessarily excel.

Which flies farther, the Firebird or the Splice?

Due to differences in mid-flight overstability, Firebirds have the potential to travel significantly farther than Splices. However, high-speed drivers respond best to high-speed arms. Amateur players may see more distance out of lower-speed drivers.

Is the Firebird or the Splice better for forehands?

Players who can power up straight drives will likely prefer the Firebird. Players who prefer to shape shots with extreme anhyzer angles will connect better with the Splice.

If you're looking for a high-speed wind-fighter that will remain stable without flexing much mid-flight, we recommend the Innova Firebird. But if you need something even more overstable that will help you shape dramatic flex shots, look no further than the Discmania Splice.

Want to read more reviews like this? Check out my Thought Space Athletics Praxis review or my Prodigy D3 vs D4 driver review!