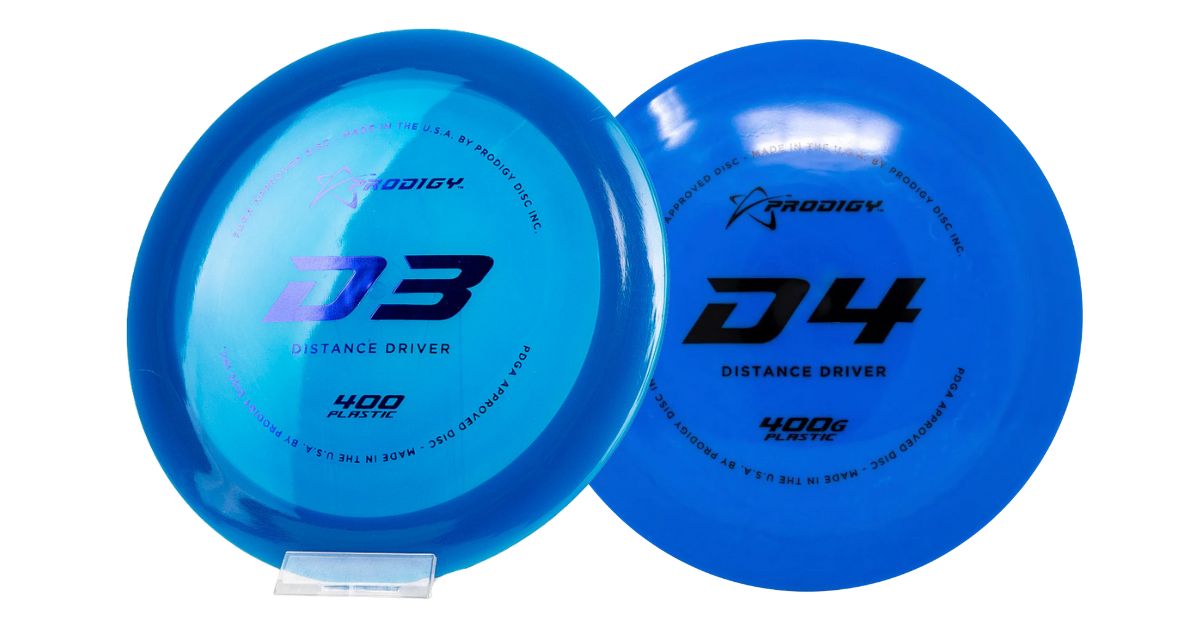 If you ask someone who bags strictly Prodigy which of the distance drivers are their favorite, more often than not, it'll boil down to the Prodigy D3 vs. D4. Both of these discs get insane distance and are comfortable in the hand right out of the box. However, individual runs can vary, so take our opinions with a grain of salt. There's always an exception to the rule, as they say.

That being said, let's break down what we love about the Prodigy D3 and D4, and hopefully, that'll help you decide which one of these zippy distance drivers will fit you best!

Comparing the Prodigy D3 vs. D4

Out of the bunch, D4 is the most understable distance driver. It is a high-speed disc with a 13 for speed. Even for disc golfers with moderate arm speed, you can still achieve a considerable amount of distance with it.

Right out of the box, the D4 will give you excellent glide, and fans of the Prodigy Disc brand have likened its flight characteristics to those of a Discraft Nuke SS, an Innova Katana, or Tern. If you throw it RHBH, it won't cut hard to finish left, but it will still provide a forward penetrating, consistent fade. Depending on how high you release it, it can potentially give you an extra 20 to 30 feet of distance, making it a good option for beginners or those with moderate-power arms.

Holding it with a power grip is comfortable because the soft beveled rim doesn't feel that shallow. You'll get a clean release from the hand with the 2.3 cm rim width. A domey D4 driver will sail for days if given the appropriate amount of power and thrown flat.

Super windy conditions may yank this disc around, but you can expect a nice S-curve on a flat release in the absence of wind. It can be finicky, so keep that in mind. In general, it'll turn and then reliably come back around. If you put the D4 on an anhyzer angle, it will stick to that line. This is a disc that just really flies exceptionally well in a tailwind.

When given a lot of snap or torque, this disc is a hyzer-flip machine. It'll flip up and go straight. However, for those powerful throws, you may run the risk of it turning over and becoming a roller. But maybe you'll find that you need one of those!

Read Next: The Best Disc Golfers Of All Time

The D4 is a great choice for playing golf on wide fairways or doing fieldwork in large areas. It's probably the most beginner-friendly distance driver from Prodigy due to the gratuitous amount of glide, but it has a lot of appeal to all players. If you're looking to build arm speed, work on your release angle, and put up more extensive distances, this disc can do that for you. It'll just need a little room and the right wind conditions.

It's been compared to an Innova Shryke but with slightly less of an S-curve flight path. It'll flip up and glide straight before fading gently, more like the Discmania DD2 Frenzy.

Prodigy recommends the D3 for hyzer flips, and its stability will keep it from turning over if you give it too much arm. Therefore, it's a great disc to trust, especially if you're working on dialing in the precise amount of power the D3 can take. This disc will land you squarely in the 400-450 foot range if you have solid form. Understanding where the limits of this disc lie are essential.

If you're more of a beginner, this disc will serve you well by giving you more distance for less power, especially for any particularly domey D3 drivers. Disc golf enthusiasts love the D3 for its simple ability to shape lines and take on those big-distance open-field bombers. An incredible disc for backhand throwers.

The D3 can be relied on to consistently flip up and give you a long glide without the extreme drift to the right or an abrupt finish to the left. However, do note: there has been much mention of plastic consistency issues between runs, especially in the D series. Along with run issues, plastic types and weight do make a huge difference.

Whatever type of player you are, this disc can easily find a home in your bag. This disc is versatile and can be used for practice shaping lines or out on the fairways to ride some tailwind on one of those perfect days for disc golf.

Ask yourself a few questions first: do you already throw something similar that will give you a sexy S-curve? If not, then these would serve you well and give you that extra distance. Do you love hyzer flips? Then yes, these are for you. If you don't already have any high-speed drivers (or 13-speeds) in your bag, give a Prodigy disc a chance!

Both the D3 and D4 will serve you well on open fairways in minimal to no wind conditions. (The D4 will most likely do better in a tailwind.) The D4 is also supposed to have a more understable flight path than the D3 and may serve disc golfers with weaker arms better. When thrown hard, the D4 will flip and react similarly to the D3.

When it comes down to the Prodigy D3 vs. D4 on the course, ultimately, the best decision is to get used to similar feeling discs and how they react to your particular arm speed and releases. That way, you can make the best-educated decision on what to pull based on what kind of shot you're facing.

One thing's for sure; overall, Prodigy's plastics are among the best on the market. Generally, anyone who has thrown Prodigy loves the great feel of their blends.

Make sure to check out our review of the Thought Space Praxis!