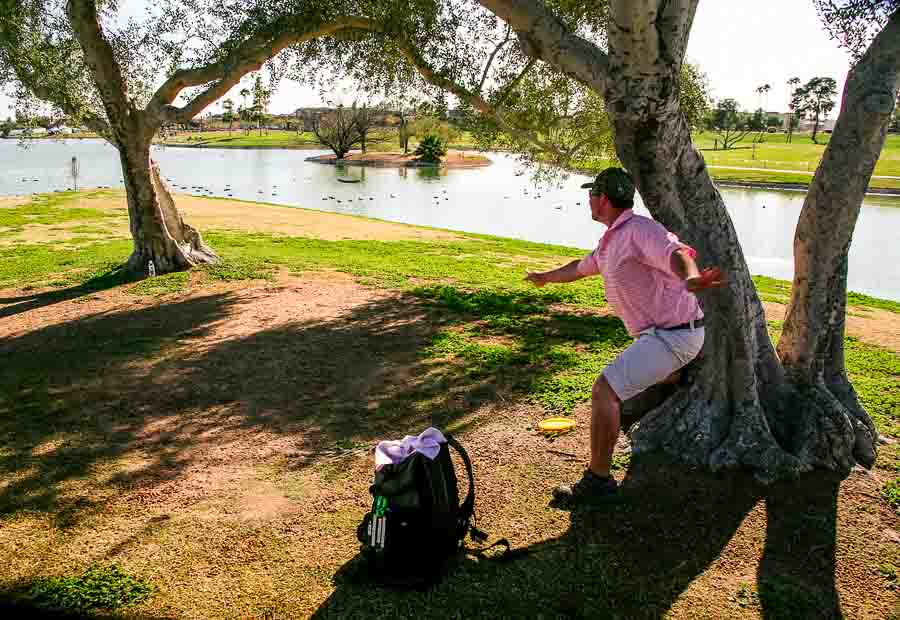 So, What Is A Provisional Shot?

A provisional shot is an extra throw that a player may take that does not get added to his score if it is not used to complete the hole. Before throwing, the player must inform the group that it's a provisional throw. Calling a provisional is essential to notify your card-mates that there may be some uncertainty about the disc in play. Therefore it has the most priority to get sorted!

Provisionals are used in a few ways: most commonly, they are used to save time and potential penalty strokes. Here are two situations where provisional shots are usually called for the sake of moving the game along:

(Not sure what a mando is? A ‘mandatory' is an artificial point, usually a tree or a pole, on the disc golf course that is typically designated by signage that will tell you to either throw to the left or right. Mandos are used to make the course safer or, in some instances, a little more difficult. Missing a mando will result in a penalty stroke.)

A three-minute rule is imposed during tournaments if a disc is lost. All card-mates are expected to help search for the disc, and if it's not found within three minutes, your disc will be declared lost, and you'll receive one penalty stroke. The next throw you can take will be taken from the previous lie or a Drop Zone (DZ) if it's designated.

Provisional throws are also used to appeal a ruling when different lies are being considered. Sometimes, an official isn't available to make the call, and a player disagrees with the group's decision. A set of provisional throws can be taken to finish a hole. If this is the case, both scores are taken, and once the appeal has been resolved, the score from the correct set of throws will be counted.

Basically, the function of a provisional throw is to allow the game to continue by postponing any official ruling until the disc in question can be settled. If a dispute can't be resolved, sometimes a player may have to play from the original throw and the provisional. But once a ruling is made, the right throws will be counted.

You can skip the penalty strokes if you're playing a casual round, such as with kids or beginners. More often than not, they can quickly add up and be discouraging to newer players, so keep it light, keep it fun, and keep learning about the great game of disc golf!

If you still want to read more then check out our tips for attending your first professional tournament.