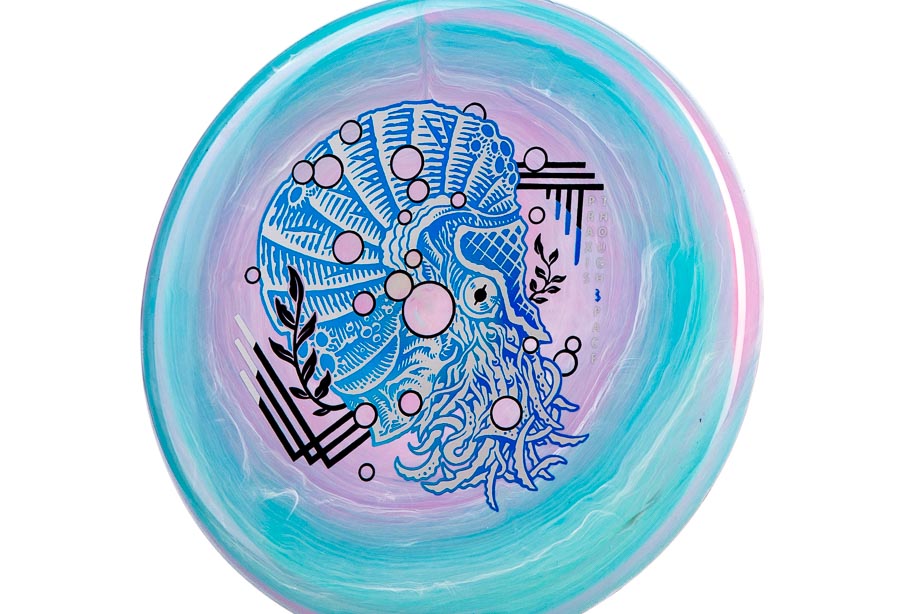 The best piece of advice I ever received is the same advice I give most often to newer players: use putters. Neutral-flying putters will show you what you're doing much more often than fairway or even midrange drivers. Besides, they're much easier to control.

At first, my neutral putter of choice was an Innova Aviar in DX plastic. But a few brutal tree kicks later, I found myself looking for other, more durable discs that would stand up to the elements a little more wholeheartedly.

I needed something higher-end, but I also wanted that same consistent flight I could trust. So I started buying premium putters from other, lesser-known companies: Dynamic Discs, Prodigy, Gateway; the list went on… but nothing clicked. Nothing felt right.

After several disheartening months, however, I found the Praxis from Thought Space Athletics. And almost immediately, I fell in love.

The Praxis is the throwing putter perfected, fast enough to handle full-power drives off the tee pad yet slow enough for touchy upshots and approaches. At 3/3/0/1, the Praxis will hold any line a player puts it on. If you throw it straight, it will fly straight. If you send it on a steep hyzer angle, it will want to hold that angle indefinitely while continuing to progress significantly.

Read Next: The 15 Best Discs For Backhand Throwers

After bagging the Praxis, I found myself reaching for it more and more often. It became my go-to disc for any shot within 200 feet, and with enough height and a touch of anhyzer, its range can extend up to 225 and beyond. The Praxis is predictable, controllable, and perfect for a one-disc round.

Nowadays, I even use it in games of catch with my friends. Its versatility for advanced players, and simultaneous ease of use for beginners, made it an instant favorite in my bag.

The Praxis is relatively shallow in terms of shape, especially compared to a DX Aviar. For fan grippers like myself, this shape is more ideal in the hand. The flight plate is flat, the shoulder rounds smoothly to the nose, and the lower rim offers a slightly curved, beadless edge for a very comfortable grip.

The Praxis is available in Aura, Ethos, Ethereal, and Glow plastic, all of which are incredibly durable and grippy. I own and throw every single one of these plastic types, but my personal favorite is Aura because it maintains elite grippiness in all conditions.

I do not notice a difference in flight characteristics from plastic to plastic – in fact, Thought Space Athletics employs MVP to manufacture their plastic compounds, so if the words Neutron, Proton, or Plasma ring any bells, you already know Thought Space uses some of the highest quality plastic in the game.

On Thought Space Athletics's website, the Praxis is described as “the perfect throwing putter,” and I’m inclined to agree with this description. The Praxis connects well with slower-speed arms but doesn't fade out to an excessive degree at the end of its flight. It also handles power, allowing more advanced players to gain controllable distance off the tee.

If you are a fan of stable putters and approach discs then the Thought Space Praxis is right up your alley!

Looking for an overstable distance driver? Check out the Discraft Predator or Raptor.