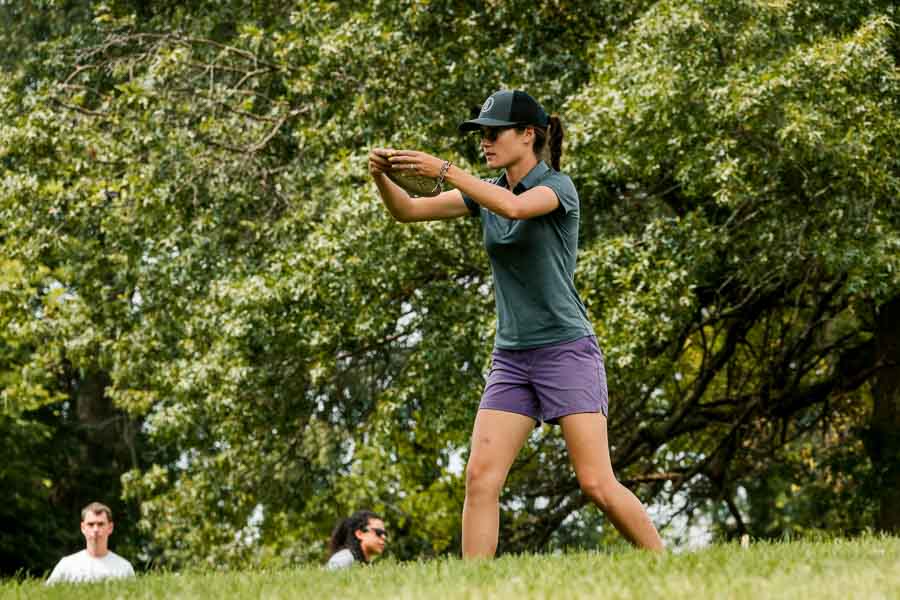 The perennially sunny Kona Panis made disc golf headlines in 2022 when she left Innova for Dynamic Discs. Her confidence and sass make her a fun follow on social media, so we got curious. What's behind that big, beaming smile?

If you're just getting introduced to this disc golf up-and-comer, here are some interesting facts about Kona Panis that you may not have known.

Disc golf runs in the family.

Her dad, Jeff, is the marketing director for Innova. She jokes that she got her dad the job because “I got sponsored by Innova first.” Her mom also works for Hero Disc USA, the Innova business arm that makes discs for canine companions! With a pedigree like this, it's no wonder she fits right in.

She says her confidence comes from growing up in a super open family, and her personality includes giving people a hard time once she gets to know them.

She credits growing up in Colorado's environment for her ability to throw hard.

Colorado elevation is well known for being a beast in its own right. Discs will naturally fly more overstable there, and since Denver sits 5,280 feet above sea level (literally a mile-high city), she's said that learning to throw harder when she was younger has helped her throw those bombers today.

Her family moved to Rancho Cucamonga, California, from Colorado so Kona could pursue disc golf at a pro level. Regardless, she's still proud of her Colorado upbringing!

She won her first Championship at age 12.

She started playing disc golf at the age of 7 and recalls attending the Snow Mountain Challenge in Winter Park, CO, every year. In 2011, she won first place at the Rocky Mountain Disc Golf Championships. Her game kept improving over the next few years to the point where she was seeing massive strokes being shaved off and realized she should play up a division.

In 2016, Kona ended up playing against one of her disc golf idols and fellow Coloradoan Kathy Hardyman (who ended up getting her on Team Innova). Kona won first place at Aviary Fools, with Kathy coming in second.

She's engaged to another disc golf player, and they're affectionately nick-named “Hot KoCo.”

We love a disc golf power couple! Her fiance is Colten Montgomery, who is sponsored by Discmania. He proposed last year during a joint disc review video by pulling out a final disc with a special question, which is entirely too cute. She's also admitted that they have the same breakfast daily (two eggs, spinach, fruit, and potatoes). Keep an eye out for this pair and their shenanigans on Youtube.

Kona and her sponsors are aligned in their mission to grow disc golf using media tools. Kona's pretty big on various social media platforms and disc golf podcasts, where she openly documents her life and journey with disc golf.

She loves how social media brings fans and athletes together- and as someone with a solid following, she's always open for meet and greets. As an influencer, you'll catch her promoting her discs and gear with plenty of tagged sponsors. Catch her posting vlogs on Facebook, Instagram, and Youtube!

When filming her announcement video, the iconic helicopter moment had many people curious. She admitted that she was nervous during filming and went along with the idea for fun. Way to be brave, Kona!

Kona and Colten live in a sprinter van named “The Freak.”

They poured their blood, sweat, and tears into this van- it's got a custom-built-out kitchen, fans, four solar panels, and even space for a hammock—hashtag #VanLife for real. “The Freak” comes from the giant zombie plastered on the side, a name given by one of her fans. (Also: their couple's name, Hot KoCo, was also given to them by a fan!)

During tournament season, the pair can be seen shuttling from one tour to the next in this unmistakable ride. The happy couple are also big travel enthusiasts and look forward to exploring more of the international disc golf scene!

She prefers sleeping in the van versus a regular bedroom.

You'd think sleeping in a van over many days and nights would be uncomfortable, but not for Kona. If The Freak is parked at a Flying J (a popular and somewhat noisy truck stop) for the night, it can get pretty loud, but Kona will just pop in a pair of earplugs, and she's good to go. Colten: not so much a fan of the earplugs.

She says her van bed is super comfy and admits that she can't sleep as well in their regular bed. With easy access to an established cupboard of van snacks at her feet, she's got us thinking about investing in our own sprinter van… maybe in the future.

Her endorsement deal is tied for the largest FPO contract in disc golf's history.

On January 3rd, 2022, Kona Panis signed a deal with Dynamic Discs that matched Kristin Tattar's deal of $500,000. Her contract includes several tour series discs, her signature disc, a bag to launch in 2023, social media bonuses, and an incentive structure for her tournament wins and professional milestones.

A: Kona Panis is currently sponsored by Dynamic Discs.

Q: How many career wins does Kona Panis have?

Q: What does Kona currently have in her bag?

A: Kona currently carries the Emac Judge, Classic Hybrid Deputy, and the Harp for putters. Her midranges include the Fuse, Emac Truth, Verdict, and Justice. For fairways, she carries the Maverick, Evader, Vandal, and Escape, and for distance, she bags the Grace, Trespass, Sheriff, Defender, and Enforcer. She also carries the Sergeant and the Felon as utility drivers.

The future is bright for Miss Kona Panis, and we're guaranteed to be seeing an explosion of interest in disc golf, especially with younger female players, thanks to her influence.