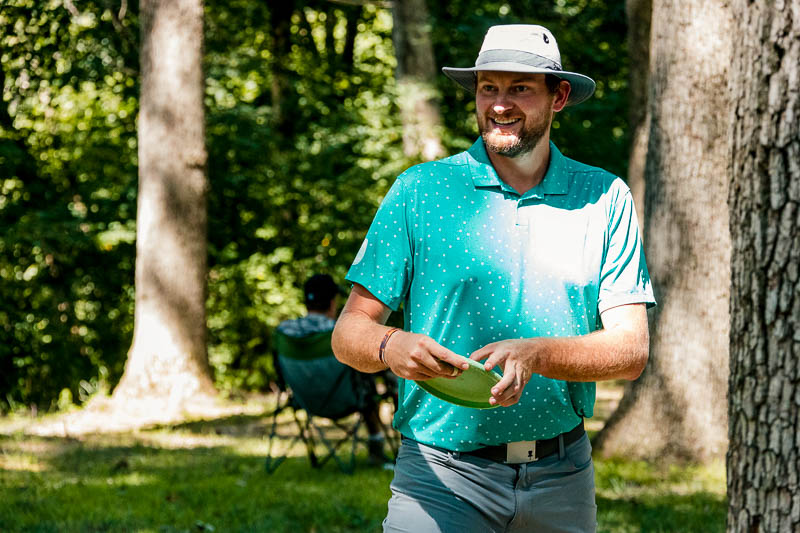 Jeremy Koling: pro disc golfer, one half of the Big Sexy commentary team, the Practice Round Prince, and an all-around delightful guy with a huge personality that many disc golfers know and love. Big Jerm is hugely popular for many reasons… but do you think you know everything about him?

As accessible as Big Jerm is, there are a lot of interesting things you may not have known about the guy, so we've rounded up 11 facts about this awesome pro disc golfer that may surprise you!

1. His journey into supporting racial justice was sparked in a Los Angeles vintage clothing shop while shopping with his sister over five years ago.

You may remember Big Jerm appearing on the Jomez YouTube channel in 2020 wearing a Black Lives Matter t-shirt while commentating on the MVP Open. Images made their way to social media, igniting a debate among disc golfers about whether or not politics belongs in the disc golf world.

In an interview with Parked, Big Jerm discusses his emotional reaction to the murders of George Floyd, Breonna Taylor, and Jacob Blake and reveals that it was a few years ago when a conversation with his sister while considering whether or not to purchase a 90's D.A.R.E shirt began to turn the gears in his mind.

He addresses the allure of avoiding controversy in the professional disc golf world and how easy it is to sit idly by. Growing the sport to be more diverse will challenge and make some community members uncomfortable, and we don't foresee JK taking the backseat any time soon.

2. He loves his board games, like Wingspan and Carcasonne.

Wingspan is a competitive, card-driven, engine-building board game where you play bird enthusiasts who try to attract the best birds to your network of wildlife preserves. There's a bit of luck involved and a good amount of strategy, and Big Jerm is a huge fan. Just take a gander (sorry) at this birdhouse!

For Carcassonne, he's also made custom meeple by using vinyl stickers that he vectored and scaled himself. Big Jerm's Cricut machine putting in work!

Prior to that visit, he had only ever thrown lids. His first sidearm throw was with an Eagle, and everybody was shocked at the 260 feet distance. But by hole 14, he and his friends had lost every single disc.

Side story: The Ching Roc actually belonged to somebody he went to school with. Even though he kept that disc, Big Jerm felt bad (of course) and, years later, met him and offered him 10 brand-new discs as an apology.

4. He was a soccer nut as a kid and dreamed of being a professional soccer player one day.

When he was younger, he carried a soccer ball around with him everywhere (rather than school books… relatable) and pretty much only wore soccer clothing.

He wasn't a big fan of school but instead focused on becoming a pro athlete and wanted to play in the MLS. Even though his family was poor growing up, he was talented enough to win a scholarship at 10!

Many years ago, his friends noticed that he was always on the videos when people would make aces. Many believe he's a literal walking good luck charm!

Even though he appeared grumpy in the videos, Big Jerm maintains that he was always excited. He believes it's in his best interest to witness people make great shots—what a pro.

Here’s a fun video documenting his gift. Is it just a coincidence? You decide.

6. When he was a child, he spent a lot of time at Rainbow gatherings with his mom, a Hare Krishna.

His mom was a successful hippie artist back in the day and has produced an adult coloring book. Her passion for people and zest for life have shaped who Big Jerm is today.

7. He used to be known for having a hot temper.

When he was with Prodigy, there was a turning point that came when he realized he had to become more of a professional.

Prodigy had offered him a monthly salary and a small percentage of ownership in the company; prior to that, he was living frugally and making sacrifices to play disc golf. He knew he had to tighten up his image and calm down.

His past blow-ups have included throwing his shoe and kicking his water bottle as a soccer ball (he got a courtesy warning for this one).

8. He's got a passion for graphic design and 3D printing.

Big Jerm went to college for graphic design. Just check out his Instagram, where he posts his drawings and designs.

His self-designed 2022 schedule features a far-out astronaut, a Big Jerm moon, and all the mileage (15K+!) he'll be traveling. You can see some of the fun stuff he likes to 3D print on Reddit, such as this Sierpinski octahedron.

9. He's got a collaboration with Johnny Fly Co.

Check out these Kona Panis facts next!